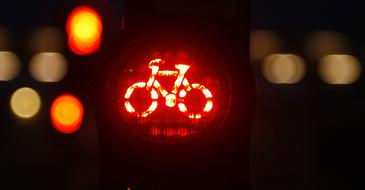 Unlike conventional self-powered lights that rely on dynamos to generate energy, the Xbat uses magnetic induction to produce the electricity needed for powering its LEDs.

The main advantage of magnetic induction over dynamos is that it is contactless. Dynamos generate energy by rubbing against the tire rim, which can reduce travelling speed and cause unwanted wear and tear to the rim.

Xbat's magnetic induction eliminates the problem of contact friction by taking advantage of the energy from a changing magnetic field.

Whenever the wheel spins, the magnetic field between the bike's metallic tire rim and the Xbat (installed near the rim) would change. The compact generator inside the Xbat then accumulates the energy from the changing magnetic field and makes the LEDs flash.

The Xbat is a winner of the 2015 TAIPEI CYCLE d&i awards, which recognizes excellence in design and innovation in the global bicycle industry.