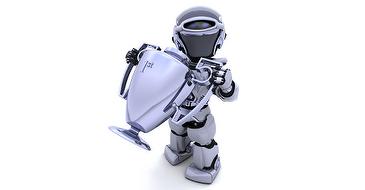 A Taiwanese team has won the robot bowling challenge for university contenders in the 2015 World Robot Olympiad (WRO).

The three-man Taiwanese team, led by Professor Soong Kai-tai of the Institute of Electrical Control Engineering of National Chiao Tung University, won with an robot that was able to bowl a strike and hit target pins while passing barriers, thanks to an efficient imaging system developed by the team.

The most challenging part of the game was to create a robot capable of coordinating its eyes and arms, because normally, the vision system of a robot can easily be interfered with by lights and by the shadows of humans, Soong said.

Soong's team managed to overcome the problem by enabling the robot to transform vision signals into actions. "This was the key to victory," Soong said.

Professor Soong's team was among the 1,850 competitors from 47 countries that attended the 12th annual WRO in Doha, Qatar.

The other two members of Soong's team were Tkachenko Oleksii, a junior student from Ukraine at NCTU's Department of Computer Science; and Chien Ching-tzu, a student in NCTU's Electrical Engineering and Computer Science Undergraduate Honors Program.