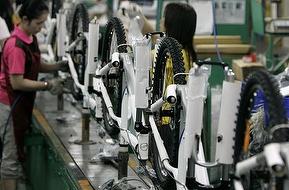 Giant on October 26 announced net earnings of NT$2.34 billion(US$7.8 million) for the first nine months of the year, up 29.6 percent from a year earlier. Earnings per share were NT$6.6.

"Buying environment-friendly products, like bicycles, has become a trend in the global market," MasterLink Securities analyst Tom Tang said. "Giant is one of the beneficiaries of such a trend."

Tang said the EPS of NT$6.6 was relatively high for the old economy sector.

According to Giant, while sales in the domestic market appeared to have slowed after a strong showing in 2009, its sales in overseas markets, including the United States, Europe, China, Japan, Australia and Canada, continued to grow.