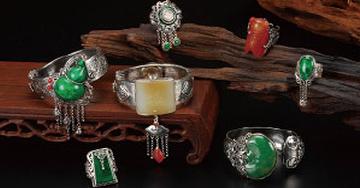 Dian-Ya has been participating in major international gemstone shows since 2009. This time around, the company visited Paris to showcase its latest creations, featuring auspicious design elements such as magpies, plum blossoms, clouds, and butterflies crafted from silver, white jade, and Taiwan ebony.

Dian-Ya was one of the members of a delegation led by the Taiwan Creative Jewellery Designer Association. The company exhibited its works alongside other Taiwanese jewelers at the EspacePierre Cardin venue.

The crowds were impressed by Dian-Ya's classic and elegant designs, which captured the essence of traditional Chinese culture. According to Dian-Ya, many Chinese visitors have expressed their appreciation of the company’s creations, which resemble the styles of the arts and crafts that were lost during the Cultural Revolution era.