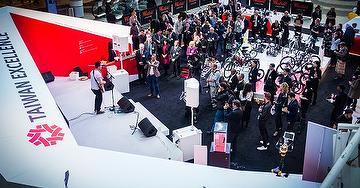 Thousands of people thronged to the Taiwan Excellence Showcase in Westfield London to see and test out some of the most innovative gadgets, gizmos and gaming technology on offer as part of the stunning five-day design show.

The event brought together over 70 brands and 190 award-winning products to the capital that captured the imagination and vision of visitors to the show.  “What amazing products”, “Such a great presentation” and “Really dynamic design” were just a few of the comments made by visitors who were simply blown away by the diversity, design and quality of manufacture.   As Paul Baker from Battersea said “I’ve been really impressed by the range of products on display.  I had no idea that some of the tech brands I really like and use on a daily basis were from Taiwan.”  Jo Murray from Wembley was also delighted, “I’m a bit of a gadget geek so the whole show has been my idea of heaven!”

The event got off to a show stopping start with performances from new pop-rock bands Laburnum and Only the Young at the Opening Ceremony which was hosted by Olympic Gold Medalist and Gadget Show TV presenter, Amy Williams.  To add the final bit of sparkle, Dr Gee San, Vice Chairman of Taiwan External Trade Development Council (TAITRA) and the Taiwan Ambassador were also in attendance with some 80 VIPs and journalists.

It is estimated that some 15,000 people visited the Taiwan Excellence Showcase in London.  Not only did they delight in the range of products being displayed and the on-stand demonstrations, but they were also able to take part in competitions each day to win a host of prizes such as renowned Taiwan brand products Giant bicycles, Acer Chromebooks, Asus Zen watches and smart home security systems from MyDlink.

The Taiwan Excellence Showcase is an initiative of Taiwan’s Ministry of Economic Affairs created to enhance the innovative image of Taiwanese companies by promoting the very best in Taiwanese consumer technology and lifestyle products.

Taiwan Excellence is the highest accolade awarded to products that encapsulate the concept of innovalue – combining innovation with added value – and all brands showcased have been recognised by the Taiwan Excellence Awards.