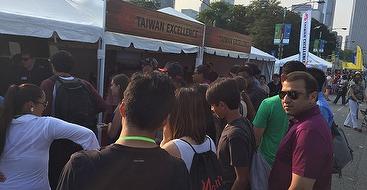 “From seeing the crowds exploring our displays and asking questions about the products, I know we executed a great event,” says Sun. “From the interactive games, to the products demonstrations and the tent design, our space at Taste of Chicago perfectly embodied the innovation and creativity of products made in Taiwan.”

Many guests were first attracted to the tent by the bicycles on display out front. The Volando IFRIT racing bike wowed visitors with the minimal weight of the carbon-fiber frame and rims. The biggest draw were the Tern Verge X10 and Tern Link D7i, lightweight folding bicycles perfect for the urban commuter. One of the Taiwan Excellence hosts, Clifford Lewis, attracted visitors by unfolding and refolding the bicycles in under 10 seconds. “When we start folding up the bikes, people stop in their tracks.” says Lewis. “Everyone is, like, ‘Wow, that’s so cool! Where can I buy one?’”