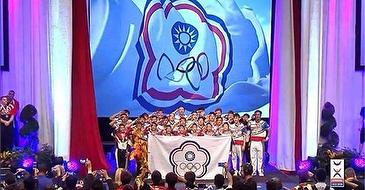 A team from Taiwan has won a gold medal at the 2015 World Cheerleading Championships, the first by a Taiwanese group in a major international cheerleading tournament.

The team of 20 won the Coed Premier event of the championships at the Walt Disney World Resort in Orlando, Florida, besting teams from the United States, Finland, and seven other countries.

According to the Chinese Taipei Cheerleading Association (CTCA), Taiwan has participated in the Coed Premier event every year since 2010.

"It’s like a dream!" said Lai Hung-ting, a cheerleader on the gold medal-winning team who has taken part in the competition four times.

CTCA Secretary-general Liao Chih-hua said that while the Taiwanese team's performance was not perfect, the cheerleaders did not buckle under pressure and rose up to the challenge.