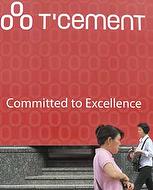 A spokeswoman for Taiwan Cement, who declined to be named, confirmed the report when contacted by AFP, but said she had no other details.

Taiwan Cement is in talks with Taiwan Sugar, a major land owner, on terms for leasing a piece of land in Pingtung, according to the report.

Solar energy has attracted significant interest in Taiwan, with Inventec Corp., a leading contract notebook computer maker, saying in September it will invest at least NT$3 billion (US$95 million) on a solar cell unit.

Chip giant Taiwan Semiconductor Manufacturing Co. (TSMC) announced last year an investment of about US$192 million for a 20-percent stake in Motech Industries, the island's largest producer of solar cells.

TSMC, the world's top contract microchip maker by revenue, this year invested another US$50 million in an American solar-panel maker.

Taiwan has estimated its solar energy industry to be worth up to NT$200 billion by 2020.