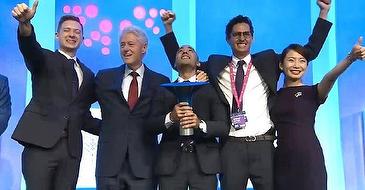 For the first time ever, a Taiwanese team ended at the top of the annual Clinton Global Initiative/Hult Prize Challenge by defeating 21,000 teams from the world's top business schools, including teams from prestigious universities, including Oxford and the University of Toronto.

A group from National Chengchi University in Taipei called IMPCT has won this year's Hult Prize and was presented US$1 million in prize money by former U.S. President Bill Clinton at a ceremony in Manhattan, New York.

The Hult Prize is an annual million-dollar business plan competition sponsored by the Clinton Global Initiative that holds five regional competitions around the world. It has awarded one startup idea per year since 2009 on a specific topic of global social importance with the aim of generating market-based solutions to the world's most pressing social issues.

This year's challenge was to provide quality early childhood education to over 10 million children in urban slums by 2020.

National Chengchi University's Team IMPCT emerged as the top prize winners of this year's challenge with its "online round" crowdfunding program.

IMPCT has set up an early childhood education center in Antiguo Cuscatlán, El Salvador, the first of its kind in the area, in a successful case of providing effective childhood education solutions to children living in poverty by using funds raised from its online crowdfunding program.

During the award ceremony on September 26, Clinton presented the award to the four-member IMPCT team formed by Chen An-nung from Taiwan, Juan Diego Prudot from Honduras, Taylor Scobbie from Canada and Andres Escobar from El Salvador who are all graduate students from the International Master of Business Administration (IMBA) program at National Chengchi University.

Among them, Prudot and Escobar are studying in Taiwan with scholarships offered by the Ministry of Foreign Affairs' Taiwan International Cooperation and Development Fund, while Scobbie is a recipient of the Ministry of Education's Taiwan Scholarship program.

Chen said that the online crowdfunding program is expected to help provide early education to children in need and change the world.