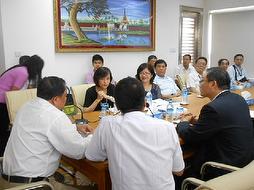 Myanmar possesses rich natural resources, an abundant labor force, and bountiful lands. Its new government has implemented reforms and open policies since its inauguration in March, 2011, which have been seen as a positive step by the international community. European countries, the US and Japan have all lifted economic sanctions against Myanmar, thus helping its economy improve rapidly.

Myanmar’s annual average GDP growth in the past three years is over eight percent, making it a market contender in the ASEAN region.

To assist Taiwanese companies in exploring the Myanmar market, the Department of Investment Services, MOEA, tasked the Taiwan External Trade Development Council (TAITRA) with the role of organizing the 2015 Investment Mission to Myanmar . With 25 representatives from 20 Taiwanese companies in tow, the group led by Department of Investment Services Director General Lian Yu-Pin visited Yangon, Myanmar for an investment tour on July 6th-10th.

This was the fourth time in three years that a Taiwan business group has been invited by the Ministry of Economic Affairs for an investment itinerary of Myanmar.

The nation boasts a market of 52 million people, and a gateway to the entire ASEAN region, which has a population of some 600 million. It enjoys various trade benefits under the ECA and has FTAs with other ASEAN countries.

During the visit the Taiwan delegation had reached a consensus to enforce bilateral investment cooperation agreements with the Directorate of Investment and Company Administration (DICA), which is the investment authority under the Ministry of National Planning and Economic Development (MNPED) of Myanmar. DICA will jointly assist Taiwanese companies in implementing business layouts in Myanmar, and construct a safety network for Taiwanese companies through an investment promotion and protection agreement as well as a memorandum of understanding (MOU).

Taiwanese businesses are mostly small and medium sized enterprises, but possess advanced technologies and flexible business management approach, which are the kind of business investors the Myanmar government would like to have in its market.

Director General Lian suggested that both sides sign promotion and protection of investment agreements and an MOU in advance. In the meantime the two sides can step up information exchanges, group exchange visits, and holding of investment seminars to assist Taiwanese companies with business layouts in Myanmar while continuing to push for the signing of the said agreements. Meanwhile, Director General Oo agreed with her suggestions and has assigned an individual to oversee the affairs.

During the visit to DICA, Taiwanese member delegates were briefed on the investment environment and incentives of Myanmar. Views were exchanged on issues, such as production, sales, and import of raw materials and components. The delegates also attended an investment seminar, and visited the International Business Promotion Center (IBPC), industrial parks and local factories.

TAITRA invited local Taiwanese businesspeople who readily shared their insights with the delegation members. Other activities during the visit included visits to industrial areas and experience sharing by Taiwanese businesses which have already established a presence in the local market. All this is aimed at assisting Taiwanese companies in getting to know more about Myanmar’s investment environment and local operation practices.

The Department of Investment Services, MOEA, indicated that the business opportunities suitable for Taiwanese companies there are in the areas of manufacturing, agriculture, and infrastructure development.

There is much room for improvement regarding the whole investment environment in Myanmar though. Insufficient basic infrastructure, high rental cost, limited consumption, and defective financial system require attention when investing in Myanmar.

According to some Myanmar-based Taiwanese and Chinese businesses, the government is still dictated by rule of man rather than by rule of law. Caution, therefore, should be taken when planning to invest in the country. Soliciting opinions from different sectors will be helpful.

Don’t rush into investing just because certain people offer verbal promises is a word of caution. When running one’s business in Myanmar, make sure to follow the relevant local investment laws and be aware of the risks.