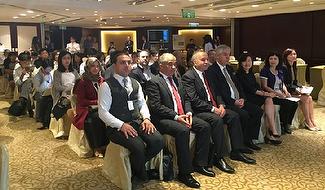 Several representatives from the Turkish Exporters Assembly (TIM), the Turkish Trade Office, and TAITRA served as key speakers, highlighting the different Turkish products among other things. Turkish exporters then proceeded to discuss possible business cooperation with the local companies in attendance.

More than 10 Turkish enterprises, assemblies and associations engaged the local businesses in a series of meetings. Among the products presented by the Turkish exporters included machinery, chemical products, furniture, foods and textiles.

The event was a success, with over 15 domestic buyers taking part in 24 brokerage meetings. Noted names in the food industry, such as Creation Food, I-MEI Foods, and Lian-Hwa Foods were among the prospective buyers.

The participating local enterprises seized the bilateral meetings to broaden their international supplier base, tapping the Turkish exporters as possible suppliers.

The Taiwanese buyers were very much satisfied with the results. They, however, would like to gain more information about the Turkish market and suppliers before taking further steps.

Bilateral trade between Taiwan and Turkey has enormous potential for growth. According to a Taiwan customs report, trade volume between the two sides in the first three quarters of this year already reached US$1.3 billion.

Meanwhile, TAITRA had conducted two trade missions to Turkey in the past months, visiting key cities like Istanbul, Ankara and Izmir. More than 150 Turkish companies attended some 280 prearranged meetings with visiting Taiwanese companies, which resulted in business opportunities worth some US$20 million.

TAITRA is planning to send another trade mission of Taiwanese businesses representing different industries to Turkey in the first quarter of 2016.