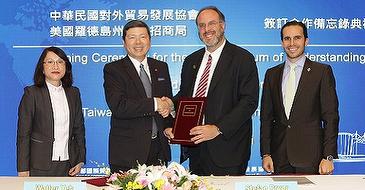 Taiwan is currently Rhode Island’s second largest export market in Asia and its seventh largest export market in the world. “This MoU will further our cooperation and mark a new milestone in our partnership,” said Yeh. “Rhode Island is famous for its health services, tourism, and manufacturing, while Taiwan is well known for its health care, travel industry, as well as its role in the global supply chain. Both of our economies are driven by innovation," he added.

Citing Rhode Island's competitive agricultural and boat building sectors, Yeh invited Secretary Pryor to form more delegations in the future and participate in Taiwan's international food and boat shows in the future, including Food Taipei and the International Boat Show Kaoshiung, which are organized by TAITRA. In addition, Yeh said TAITRA would provide tailor-made services to facilitate Rhode Island's enterprises in forming closer partnerships with Taiwan's businesses. He also invited Rhode Island to establish a representative office in Taiwan in order to further enhance their cooperation.

The Rhode Island trade delegation led by Secretary Pryor was in Taiwan from Aug. 23 to 26. In addition to attending the MoU ceremony, the delegation had one-one-one business meetings with Taiwanese businesses and held a seminar on investing in Rhode Island.

TAITRA has so far signed 56 cooperation agreements with various U.S. private and public organizations, including the U.S. Department of Commerce. In 2014, the United States was Taiwan’s second-largest trade partner while Taiwan was among the United States' top ten trading partners.