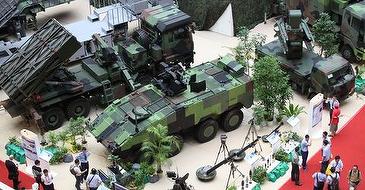 The biennial "Taipei Aerospace & Defense Technology Exhibition(TADTE)" will be held at Taipei World Trade Center Hall 1 from August 13th to 16th. This exhibition is organized by Taiwan External Trade Development Council (TAITRA), and co-organized by Committee for Aviation Industry Development and the Taiwan Aerospace Industry Association.

TADTE 2015 gathers 126 exhibitors from home and abroad who will be using 694 booths, a significant nearly 27% increase on the number of exhibitors at TADTE 2015. There are exhibitors from countries including the United States, Germany, Sweden, Japan, the UK, Italy, and Ireland either directly participating in the event or doing so through their agents. This is the only exhibition in Taiwan that integrates civilian and military aerospace equipment and components, as well as national defense weaponry and related equipment in one show. Exhibits will include the latest aerospace equipment and technology, national defense equipment, emergency rescue equipment, as well as aviation sports and recreation products.

In previous edition, the Ministry of Defense's "National Defense Pavilion" has always exhibited Taiwan's strong national-defense capabilities, and has always been the most distinctive exhibition area. This year, the event will have several new bright spots, including the newly established "Precision Machine Tool Area," the "U.S.A. Pavilion," and the "Chinese Association for General Aviation Development Area," as well as the "Unmanned Aerial Vehicle (UAV) Area," which has seen its number of exhibitors rise to 12. In addition, there will also be flight training as well as aircraft maintenance and repair exhibitors participating in this year's exhibition.

In 2014, the total value of Taiwan's tools and equipment exports ranked 4th globally, with annual value of production ranking 7th globally. The production of aerospace tools and equipment is an important diversification strategy for Taiwan's exhibitors. This year's "Precision Machine Tool Area " features 7 exhibitors occupying 19 booths, extending the reach of the exhibition further into the upstream portion of the industry. The "Chinese Association for General Aviation Development Area " will be composed of 12 exhibitors, all of which are first-time exhibitors. There will also be 2 light aircraft on display. The "U.S.A. Pavilion " is organized by the American State Offices Association (ASOA), and this will be the first year in which it is featured. Six exhibitors will exhibit military as well as aviation equipment.

According to market research company PrivCo, US$ 412 million was invested toward the field of UAVs globally in 2014, representing a year-on-year growth rate of 44%. The number of exhibitors in this year's "Unmanned Aerial Vehicle (UAV) Area" will also increase from 7 to 12, which shows that the industry is extremely optimistic about the huge market potential of UAVs.

Don't miss our wide range of events and activities

A wide range of events will be held during the show, including the "Taiwan-Canada Aerospace Technology Exchange Forum 2015," the "Unmanned Aircraft Technology Development and the Latest Application Conference," the "2015 Industrial Cooperation International Conference," the "Introduction of GEN III Image Intensifier & Assembly Technology", the "Advanced Aviation Composite Technology and Quality System & Certification Seminar," the "Application for UAS and FAA Regulations," the "New Product Launch," and the "One-to-One Procurement Meetings." Professionals from foreign and domestic companies are cordially invited to attend. For event details, please visit the exhibition website: www.tadte.com.tw