Super-Thin Panel Will Give Taiwan Advantage 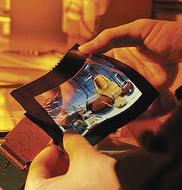 Taiwan's top industrial research body has said that one of its inventions, which won the gold award from the Wall Street Journal on September 27, will help Taiwanese flat panel makers gain a leading position over their foreign rivals.

The Industrial Technology Research Institute (ITRI) was announced as the winner of the U.S. business daily's annual Technology Innovation Awards contest for its work in "developing high-quality displays made from materials that can be bent or folded."

Companies, organizations and individuals in 30 countries submitted 597 applications this year for the contest, now in its 10th year.

In addition to capturing the overall Gold award, the ITRI took top place in the consumer electronics category for the second consecutive time this year, beating Nokia Corp. and Ford Motor Co.

Last year, the ITRI topped the category with a paper-thin flexible speaker.

The Wall Street Journal described the ITRI invention as "a manufacturing technique that promises to clear the way for commercial development of high-quality displays on flexible materials."

Lee Cheng-chung, co-head of the research project, said in an interview with Taiwan’s Central News Agency on September 26 that while Taiwan panel makers are falling behind their foreign competitors, mainly in South Korea and Japan, the ITRI's new invention could help Taiwanese companies lead the world in the field of flexible displays in the future.

Many countries have been trying to make paper thin displays using plastic instead of glass, based on the reasoning that plastic can be folded and made thinner, said Lee, who is also a division director of the ITRI's Display Technology Center.

However, they have been unable to remove the plastic panel from the base plate without damaging the panel, he noted.

The institute, on the other hand, has developed what it calls a "debonding layer," which makes the separation easy, he said.

The invention has captured the attention of foreign companies, including Taiwan's competitors, Lee said.

Major flat panel makers in Taiwan, including AU Optronics Corp. (AUO), have already started to use the institute's technology on their production lines, Lee went on.

He forecast that an e-reader using the ITRI technology will hit the market by the second half of 2011.

The invention is expected to pave the way for the emergence of thinner and foldable smartphones, tablet computers, e-readers and large poster displays, Lee said.

Future super-thin panels will also be equipped with videoconferencing and multi-touch functions, he said, adding that the institute has already created a multi-touch, super-thin model.