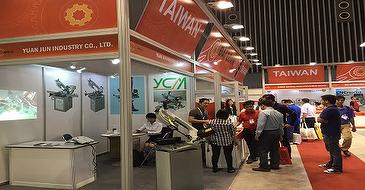 Held on a 9,250 square-meter space, the show drew large crowds, including some 9,600 buyers from across the world.

The Taiwan group was spearheaded by the Taiwan External Trade Development Council (TAITRA) under the supervision of the Bureau of Foreign Trade, Ministry of Economic Affairs (MOEA).

Ching Hung Machinery & Electric, which accounts for over 85% of Taiwan’s exports of wire cut EDM machines to Vietnam, is a key player in the local machinery sector. The company sees great market potential in Vietnam and hopes to expand business partnerships with local manufacturers.

Meanwhile, Yuan Jun had attracted great interest from visitors with its line of sawing machines. The company is currently represented by a local sales agent.

Vietnam's benchmark purchasing managers' index (PMI) for manufacturing has been expanding since August 2013. Its manufacturing sector is experiencing a period of continuous growth with a very promising future.

Vietnam has been drawing quite a few foreign countries to invest in the country. Its attractive location in the Indochina region, young population and relatively lower labor costs are factors in this regard. Among the top foreign investors in the country is Taiwan, which has been noticeably present in the market since 1991.