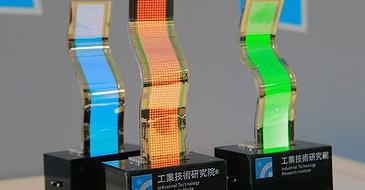 At this year's Touch Taiwan, which took place at the TWTC Nangang Exhibition Hall on Aug. 26 to 28, the world's largest touch panel and optical film exhibition, the Industrial Technology Research Institute (ITRI) unveiled its latest achievements in display and touch panel technology.

ITRI is globally recognized for its advanced research in the field of on-cell touch AMOLED. Collaborating with Japan's LINTEC, ITRI has eliminated the interference between the touch screen and the AMOLED driver to successfully develop on-cell touch AMOLED back panels that are less than 0.1 mm in thickness. The technology is expected to foster the development of foldable tablets and next generation handheld devices.

ITRI is also well known for its development of out-cell touch AMOLED. Working with Germany's Heraeus, ITRI developed a flexible touch panel and a bending resistant bonding process. The result gave rise to a flexible, lightweight, and thin out-cell touch AMOLED, which is expected to generate potent applications in the field of wearable devices.