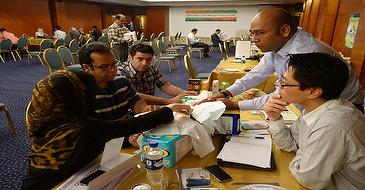 Iran is a resource rich country. It is the 2nd largest oil supplier among OPEC-member countries. Its abundant reserves of petroleum (153B barrels), natural gas (33.6T cubic meters), coal, chromium, copper, iron, lead and other minerals have helped the nation stay afloat during hard times.

With a population of 80 million and a land area of 16.5 million km2, Iran is the second largest economy in the Middle-East region. Moreover, Iranians are well educated with a sizable number having a degree in engineering.

But despite its vast resources, Iran still struggles economically. Developed states sitting on the UN Security Council imposed sanctions against the nation in 2006 after it refused to suspend its uranium enrichment program. With limited access to global markets, the economic development of Iran has stagnated.

Last April 2nd, however, the group of six world powers, collectively known as the P5+1, and Iran reached a tentative agreement that could lift most of the sanctions once it’s been implemented. This would bring out the pressing needs of the country for all sorts of industrial and consumer goods, which can be readily met by such an export-oriented county as Taiwan.

To help Taiwanese enterprises explore more business opportunity in Iran, the Taiwan External Trade Development Council (TAITRA) is going to send four trade delegations to visit Iran in 2H this year. These groups will aim to satisfy the market’s increasing demand for vehicle electronics, parts, and accessories, as well as industrial machinery, electrical devices, computers, medical and fitness equipment and other products.

The delegations will visit major cities like Tehran, Esfahan, Mashhad, Shiraz and Tabriz, and hold a series of trade meetings with the Iranian business community. The visits will provide an opportunity to discuss possible trade and investment cooperation between Iran and Taiwan.