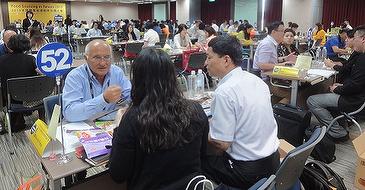 According to official statistics, Taiwanese food and agricultural exports from January to May 2015 were valued at US$1.65 billion. The four biggest overseas markets were China, which accounted for US$342 million in exports; Japan, US$277million; the U.S, US$200 million, and Hong Kong at US$132 million. Notably, exports to the Korean market grew by 16.37% in 2014 and increased by 20.33% during the January to May time period in 2014 and 2015. Because of such growth potential, Korean buyers, including Cellplus and Sayo Haepyo Corporation, were invited. And to expand into the Muslim market, 8 buyers from Malaysia, Indonesia, Singapore, the United Arab Emirates, Qatar, and Turkey were invited.

Japanese buyer Inoue Shouten Co., Ltd., which attended Food Sourcing in Taiwan 2015 for the first time and provided seafood products for supermarkets and department stores in Japan, found potential Taiwanese partners for fish products in one-on-one meetings and planned to visit their factories to develop the relationship. Another Japanese buyer Hokushin-Shouji Co., Ltd., which sells Taiwanese carrots in Japan, indicted that fresh vegetables from Taiwan have good quality and are reasonably priced. They intend to search for more products to sell in the Japanese market.

Brazilian buyer Sindicato do Comercio Atacadista do Parana, which was established 60 years ago and had annual sales valued at US$5.6 billion, attended Food Sourcing in Taiwan 2015 to look for leisure foods and special agricultural products. The company revealed that they were impressed by the delicate packing and the variety of flavors, such as black tea with ginger, vinegar with rose, sweet olive or lemon grass flavor and honey with lychee flavor. These flavors are rare in the Brazilian market, making them a great business opportunity.

In addition to one-on-one meetings, TAITRA also held two food market seminars at the Nangang Exhibition Hall on July 25th. One seminar introduced the U.S. food market and Albert Lin, the general manager of King Wai Trading Company, gave a lecture on procurement in the US. King Wai Trading is responsible for sourcing Asian food for 2,640 supermarkets in the US. Another seminar focused on the food markets of China by introducing the latest Chinese food regulations and a case study of the O2O business model for food products in China. This information provided valuable insight for suppliers in the Taiwanese food industry.