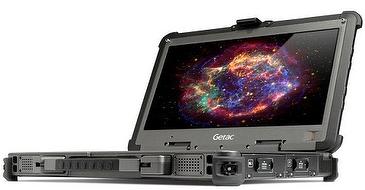 Getac Technology Corp., the world's second-largest rugged computer maker, said Thursday that its rugged PC growth will outperform the industry this year thanks to the addition of new clients.

Getac Chairman James Hwang told a media briefing that his company's 2015 rugged PC shipments are forecast to grow 20-40 percent from last year, compared with a 5-10 percent growth in the overall market.

He said he expects rugged PC shipments to grow by a "single-digit" rate sequentially from the second quarter to the fourth quarter of this year, driven by new clients in the automobile, medical services and consumer services sectors.

Hwang added that Getac launched a new "Veretos" in-car mobile video system May 7 in the United States that is designed for law enforcement and military professionals, with two to three U.S. police departments already using the system.

Getac sees great market potential in the U.S. law enforcement sector because there are an estimated over 20,000 police patrol cars in the U.S., but the business will not become a major earner until next year, Hwang said.

Rugged computers are specifically designed to operate reliably in harsh usage environments and conditions, such as strong vibrations, extreme temperatures and wet or dusty conditions.

In the first three months of 2015, Getac reported consolidated revenue of US$138 million, up 22.6 percent from a year earlier, while the Taiwanese company's rugged PC shipments increased by a higher rate of 40 percent during the quarter.

Getac was founded in 1989 as a joint venture between U.S.-based GE Aerospace and MiTAC Inc., the third-largest computing group in Taiwan, to supply defense electronic products.

In the second quarter of 2014, Getac overtook Dell Inc. as the world's second-largest rugged computer provider, with roughly 16 percent of the global market, which is dominated by Japan's Panasonic Corp. with a nearly 60 percent market share.