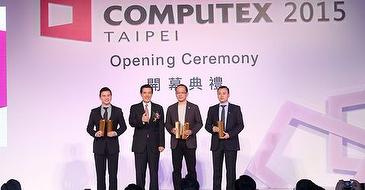 Connections—and more connections—is the talk of the town at COMPUTEX TAIPEI from June 2-6 this year. For five inspiring days, the largest ICT trade show in Asia and second largest in the world will shape the future by connecting ICT with tech, industry, markets and media.

Meanwhile, COMPUTEX also welcomed the highest ranking US official to ever take part in the opening ceremony, Ma said.

Charles H. Rivkin, Assistant Secretary, Bureau of Economic and Business Affairs, U.S. Department of State, was among the important delegates at the event. He noted that Taiwan’s rapid ICT industrialization reminded him of “the frog in the well’, a fable that Taiwanese parents tell their children to encourage them to think more broadly and reach higher. He mentioned the story because “we are all thinking about embracing the future and the great potential of the digital economy which Taiwan and COMPUTEX have already done so much to build.”

Rivkin also announced deepening cooperation between the US and Taiwan through the launch of the “Digital Economy Forum”. This will be a multi-stakeholder platform that gives both sides the opportunity to strengthen partnership and coordination on digital trade, innovation and internet policy issues.

Bilateral trade with the US, which replaced Japan as Taiwan’s second largest trading partner last year, reached US$67.4 billion in the same period, a figure Ma said was mostly made up of Taiwan’s technology exports.

Ma also handed out the COMPUTEX d&i awards and the Best Choice Award.

After having successfully opened this year’s show, Ma led a VIP tour of the COMPUTEX showground, including a visit to the COMPUTEX d&i awards Pavilion showcasing quality ICT products.