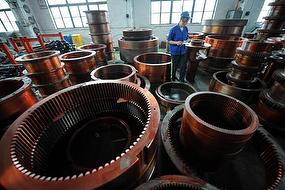 "In the world market of machine tools, China has become a more important player because it is not only the biggest machine tool market but also the biggest producer," said Christoph Blattler, the secretary-general of the Swiss Mechanical and Electrical Engineering Industries in an interview with the Central News Agency.

"Since it has become a direct competitor to Taiwan and Switzerland, both countries will need to think about their differentiation points to the Chinese industry," he said.

Blattler suggested that manufacturing components could be one niche for Taiwan to explore.

"Now about half of Switzerland's machine tool companies still have problems with their supply chains for certain key components of machine tools, and this is exactly where the Taiwanese industry can jump in," he said at the 2011 Taipei International Machine Tool Show.

Jost Feer, director of the Trade Office of Swiss Industries, agreed that improving its ability to manufacture key components would be important to the sector's future in Taiwan, but he was skeptical over the impact a trade pact with China would have on the industry.

"The ECFA is only in the beginning stage. So far Taiwan has only a very small number of products which can enjoy duty-free exports to China," Feer said, referring to the economic cooperation framework agreement that Taiwan signed with China last year.

"In the machine tool business, Taiwan has already produced certain types of machine tools in China for a long time, so not even Taiwanese companies can benefit a lot from that."

Feer acknowledged, however, that certain Taiwanese machine tool makers would enjoy short term benefits over the next three to five years under the "early harvest program" of the ECFA.

But he was not sure how long the benefits could be sustained because he believed China, as a member of the World Trade Organization, would eventually have to lower its duties on machine tools imported from all countries around the world.

Taiwan was the world's fourth biggest machine tool exporter during the first 11 months of 2010 with US$2.67 billion in exports, trailing only Germany, Japan and Italy.

China (including Hong Kong) was the major destination for Taiwan's machine tools during that time, its US$1.24 billion in machine tool purchases from Taiwan accounting for 46.5 percent of the country's total exports.

Switzerland was the third leading supplier of machine tools to Taiwan during the January-November 2010 period, accounting for US$41.5 million, or 6.4 percent of Taiwan's machine tool imports.