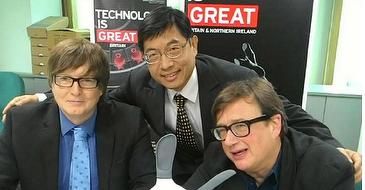 A visiting British professor of cognitive neuroscience recently remarked in Taipei that Taiwan and the United Kingdom can together explore cooperation opportunities in the field of developing and building assistance robots.

Tony Prescott, director of the Sheffield Centre for Robotics and professor at the University of Sheffield, is a member of the U.K. robotics and autonomous systems mission that visited Taiwan on Nov. 19-24 looking to further U.K.-Taiwan cooperation in the robotics field.

In a meeting with local media, Prescott said that there are many British organizations focusing on research into deep learning -- a branch of machine learning -- and that many startups in the U.K. have been working with Google in the field.

The U.K. has a long history in the development of artificial intelligence (AI), and the British government has been sparing no efforts in integrating AI research around the U.K., he said.

In terms of future AI applications, Prescott said, his country will focus on applications in the fields of medical treatment and language identification.

Compared with Japan's efforts in developing and building human-shaped robots, the U.K. mainly concentrates on the development of robots for specific purposes, such as those operating on farmland and underwater, or serving as air reconnaissance, he noted.

Aside from designing new generations of robots for the manufacturing industry, the U.K. has also developed a prototype of intelligent human-shaped robots, Prescott said.