All Eyes on COMPUTEX d&i awards at IFA 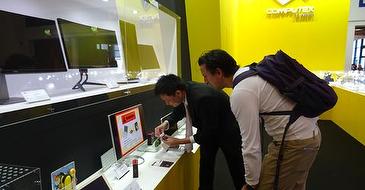 Berlin, September 6th—One of the world’s important ICT trade shows, IFA (Internationale Funkausstellung Berlin) takes place this year from September 4th to 9th at the Messe Berlin. The 29 halls are divided into seven major categories: Home & Entertainment, Audio Entertainment, Home Appliances, My Media, Public Media, Communication, and Technology & Components. This year’s show features 1654 exhibitors (a 7% growth from 2014) spread over 150,000 square meters (a 0.3% growth from 2014). Many international brands gather at this platform to display and market complete product lines in an interactive and experiential format.

The COMPUTEX d&i awards were established in 2008 and is now in its 8th year. In 2015, the award received 271 submissions, reflecting the international support and acceptance it receives. A special feature of the award is the international tour, in which the winning designs are displayed in major overseas markets. The organizers also collect enquiries and suggestions from potential buyers on behalf of the winning companies.

After IFA, the COMPUTEX d&i awards will continue to GITEX in Dubai this October, then onwards to CES in Las Vegas and MWC in Barcelona. It is expected that new emerging markets will be added to the lineup next year in the effort to promote the winners of the award. The 2016 COMPUTEX d&i awards will open registration beginning December 2015. For more information, please visit our official website at https://www.computextaipei.com.tw