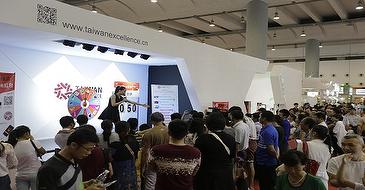 Ningbo is situated in the central part of China's eastern coastlines. Bordering Shanghai and Hangzhou, it enjoys a rapidly growing economy. This seaport city is fast becoming an important industrial hub for international trade. Its GDP last year stood at RMB 760.251 billion, or an increase of 7.6 percent on year.

The Taiwan Trade Fair has been held 37 times so far between 2009 and 2015. It has created business opportunities worth nearly US$145 billion and attracted over 9.69 billion visitors.

Among the products on display include 13 of the world’s most cutting-edge innovations. The PLA bottles and the S. Café® technology clothes are two exemplary examples. PLA bottles are made of biodegradable materials, mainly natural bio-based substances that undergo fermentation and chemical processes or polymerization of monomer and petrochemical products. They are generally made from renewable natural resources, such as microbial, plant, or animal polymers. With sufficient humidity, temperature, and the presence of oxygen and bacteria, they will be consumed by microorganisms and revert to compounds like water and carbon dioxide.

S. Café® technology clothes, which undergo a low-temperature, high-pressure and energy saving process, feature coffee grounds onto the yarn’s surface that change the characteristics of the filament, which dries three times faster than cotton.

The 2015 Ningbo Taiwan Trade Fair will be cohosted by the Zhejiang Provincial Government and the Taiwan Trade Center. It will run from June 18th to 21th at the Ningbo International Conference and Exhibition Center.

The Taiwan pavilions will highlight a number of award-winning products. TAITRA is convinced that the event will generate a new wave of interest for Taiwanese products across Mainland China. For more information on the 2015 Taiwan Trade Fair, please visit http://www.taiwantradefair.com/.