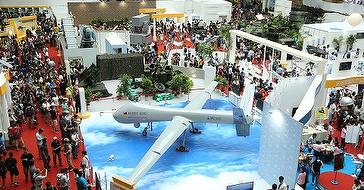 The heavyweight buyers of this year’s exhibition were from Germany, the United States, Canada, Israel, Poland, and Kuwait, with procured items including police and military gear and equipment, UAVs and components, aerospace tools and machinery, aerospace components, and communications products. Kuwait’s Al-Kazemi Holding for General Trading exclaimed that Taiwan’s self-developed defense products and equipment offer high-quality at reasonable prices, making them extremely competitive in the global market. Israel’s Elimec said that Taiwan has a strong ICT (information and communications technology) industry, which is advantageous in the aerospace and military electronics markets. Magazine reporters Tim Robinson (of UK magazine AEROSPACE) and Romain Guillot (of French publication LE JOURNAL DE L’AVIATION), who were invited to cover the show, said that the exhibition, while relatively small in scale, represented quality-over-quantity and offered a world-class capacity for meeting B2B needs.

AIDC (Aerospace Industrial Development Corporation), a leader in Taiwan’s aerospace industry, is now integrating Taiwan’s aerospace supply chain, extending the Navy’s spirit of “Self-Managed National Defense and Domestically Produced Defense Equipment”, and realize the goal of “Self-made Defense Aircraft” by competing for the Air Force’s procurement order for 66 advanced training aircraft, which, along with subsequent maintenance and repair services, amounts to contracts worth up to NT$200 billion. During the exhibition, General Electric (GE) —global aircraft engine-maker — sent high-ranking executives to the exhibition and said that it would increase the amount of procurements in the Asia-Pacific region for engine components, which will include the procurement of engine casings from AIDC (worth up to NT$11 billion) and OGV diffusers from Chaheng Precision (estimated at more than NT$3 billion). Other suppliers in Taiwan will also benefit from these procurement programs.

Exhibitors from the aviation services industry joined the exhibition for the first time this year. Aircraft MRO (maintenance, repair, and overhaul) giant Air Asia uses its exclusive technologies to improve Mast Mounted Sight (MMS) availability to nearly 80%, which is significantly higher than the industry average of 62%, demonstrating its exceptional MRO capabilities. Air Asia’s newly-developed disposable black box also attracted the attention of the aviation industry. In addition, the APEX Flight Academy — Taiwan’s only flight school — said that it has successfully achieved its goals for participating in the exhibition, demonstrating to the general public its strengths in terms of professional training, and successfully met new potential clients interested in collaborating on an entry-level pilot training system to compete with the existing international system which has been in use for many years.

The “Precision Machine Tool Area” was debuted this year with a total of 7 precision machine and components exhibitors in the area occupying 19 booths. Exhibitors said that they met many academic and cutting-edge research clients during the exhibition, which will help in the development of relative markets. Some exhibitors say that they plan to bring even more product models to display next time, and that they will demonstrate their processing processes in the future. In addition to this exhibit area, another 9 precision components exhibitors in the “Aerospace/National Defense Equipment and Technologies Area.” The exhibitors took this exhibition as a platform for maintaining collaborative relationships with existing customers and to develop potential new clients.